The School Councillors meet regularly together with Mrs Cooper and members of the school leadership team to discuss different projects, many of which are linked to whole school development plans. Other teaching staff, or governors may join the meeting as necessary, depending on the focus of the project. The agenda is handed out at the beginning of each meeting and any findings from class discussions are shared with the group.

The meetings may focus on topics such as; Do you feel happy and safe at school? How can we make our school an even happier place? What charities could we support this year?

Members will feed back to their classmates on topics discussed in the meetings. The councillors will often have information to collect on their class’s views and ideas, which they then come prepared to share at the next meeting. These meetings give the children the opportunity to let adults know their feelings and opinions on things that affect them. It also enables them to have a say about decisions made in school, while letting them play an active role in making their school a better place.

We look forward to sharing the School Council’s activities with you throughout the year.

Each class has had an election to select a member of their class to represent them in the School Council. We are pleased to announce the new councillors are:

Year 2 - Madeleine from Beech, Denisa from Oak, Oscar from Pine and Betty from Willow

Year 1 - Zoe from Badgers, Filip from Foxes, Pippa from Hedgehogs and Callum from Otters

Reception - Lara from Kingfishers, Natalie from Robins, Jake from Swallows and Stefan from Wrens

The school councillor elected will now represent the class for the rest of this academic year.

The school councillors will meet regularly with Mrs Cooper and members of the school leadership team to discuss different projects. The meetings give the children the opportunity to let adults know their feelings and opinions on things that affect them. It also enables them to have a say about decisions made in school, while letting them play an active role in making their school a better place. Their first task is going to be helping to improve the role of playground buddies in the school. We look forward to sharing the School Council’s activities with you throughout the year.

The School Council’s current project is ‘playtimes’. We have been discussing what we like about playtimes but also how we could improve them. We are looking in particular at the equipment we currently have to play with and are going to help decide what new equipment the school should have to make playtimes even more enjoyable.

Since the children returned to school in the Spring term the School Council have been finding out how everyone is feeling. They each helped their class to fill in a questionnaire asking questions such as ‘How does being back at school make you feel?’, ‘What are the best things about being back at school?’ and ‘If you feel worried about anything what could you do?’.

In a School Council meeting we shared the answers from each class. Comments such as “I’m happy because I can play with my friends again!”, “It’s nice to be back at school”, “I love this school!”, “I like learning new things” showed us that the children had settled back into school life well. A few children shared worries such as “I’m a little sad because I miss my family”, “I got used to being at home” and “I might have forgotten some of the maths we had done” but we discussed how the children know what to do and who they can talk to if they are feeling worried or sad.

The School Council have agreed that recycling is very important so just before half term they met with Mr Warriner to find out more about recycling paper. They  talked about why it is important to recycle paper and helped to empty the recycling bins around the school. Then Mr Warriner showed them what happens to the paper next.

We noticed that not everyone is remembering to put used paper into the special recycling bins so decided that posters in all the classrooms would be useful. Mrs Cooper did an assembly letting the whole school know about recycling paper and set up a poster competition.

All the Year 1 and Year 2 children designed a poster to promote recycling and then each class had a vote to decide on the class winner. Mrs Edwards, Mr Warriner and the School Council then had the tough job of choosing the overall Year 1 and Year 2 winners.

Comments from the School Council such as “They are all very bright and colourful” “The bright colours make them easy to see from a long way away” and “It’s a very hard decision” show how tricky it was but it was eventually decided that Joshua from Pine and Freya from Hedgehogs were the winners. 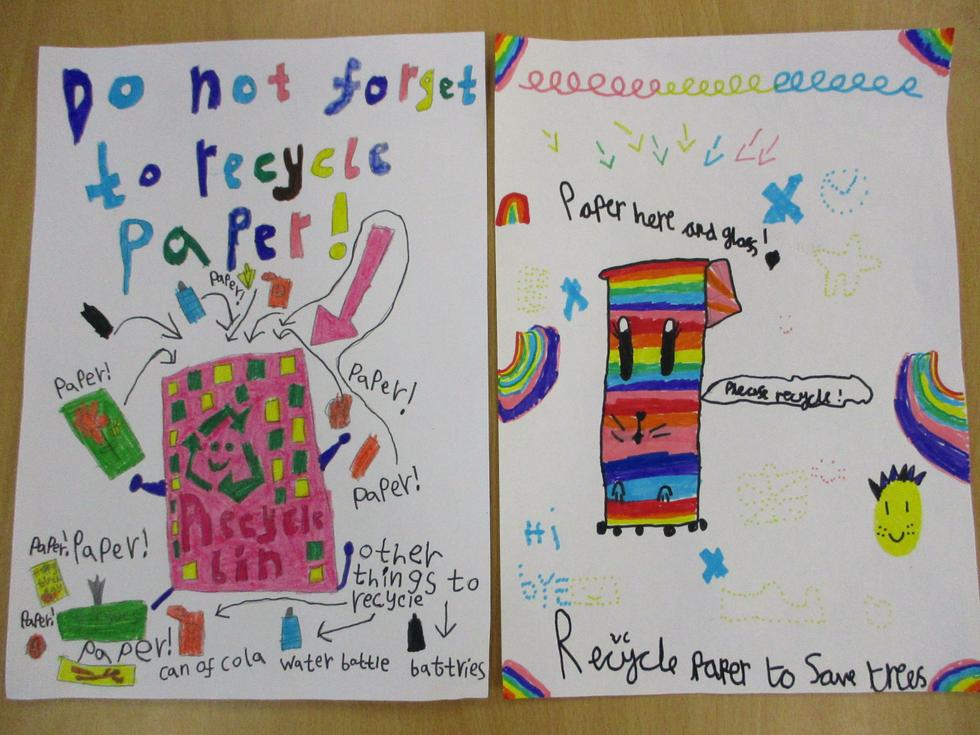 Evie from Oak and Lyla from Willow 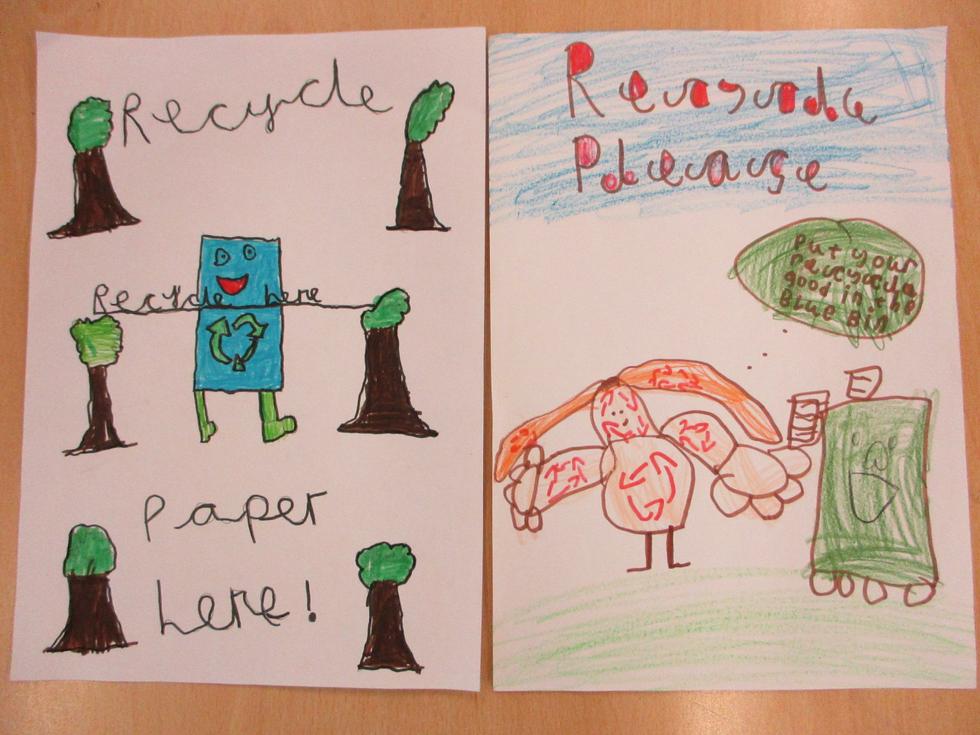 Henry from Beech and Apple from Otters 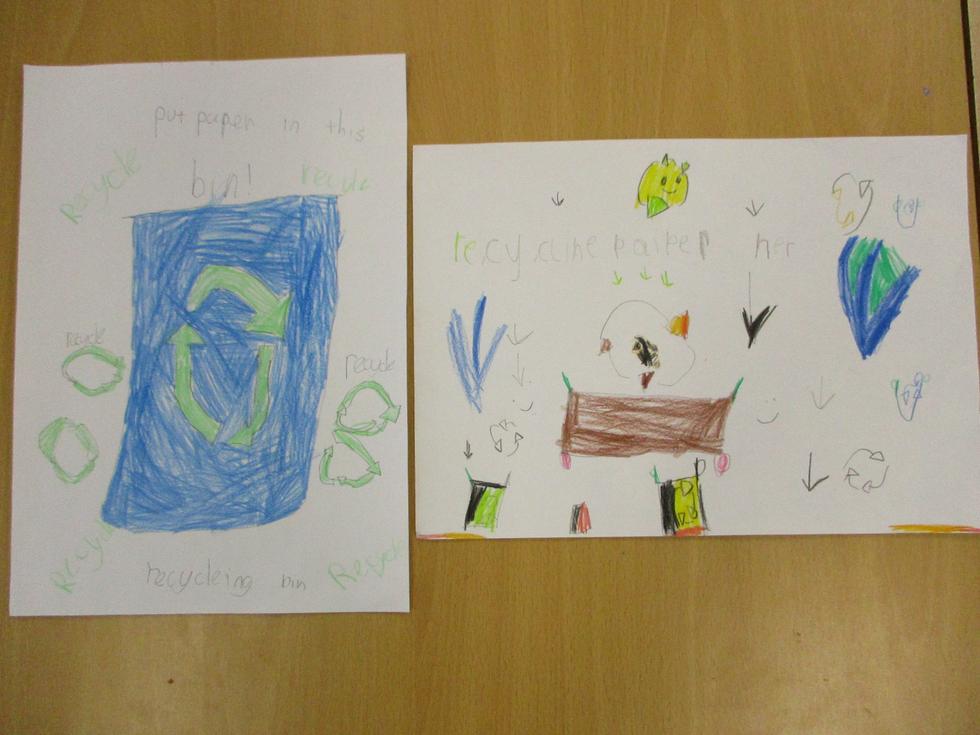 Macey from Foxes and Lawan from Badgers

And finally the winners… 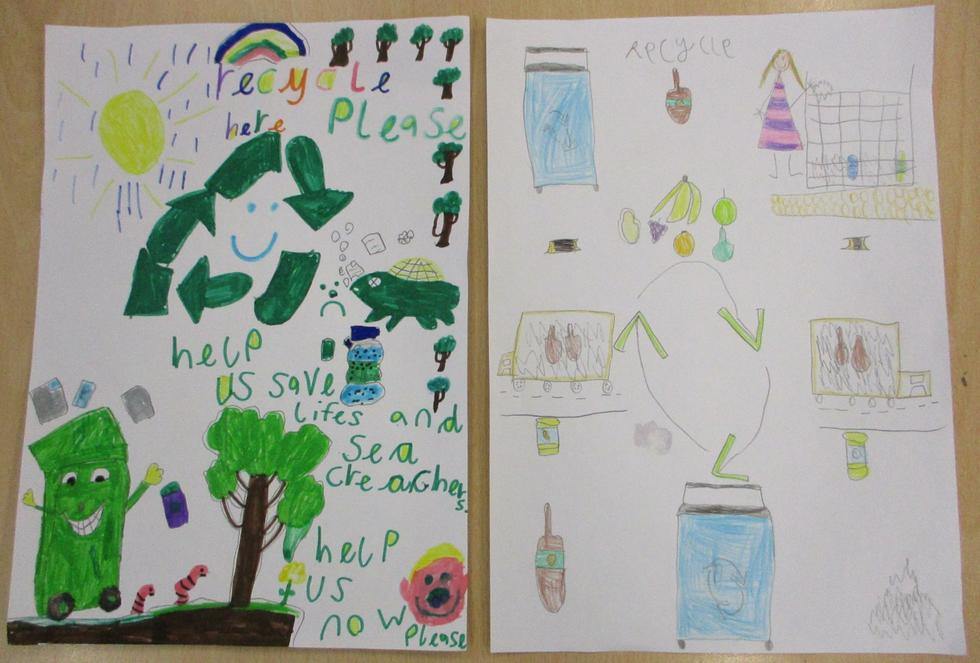 Joshua from Pine and Freya from Hedgehogs.

Well done to everyone – all the posters were excellent!

The School Council is currently deciding what other recycling projects could be taken on by the school. We will keep you updated…

Well done to all of our school councillors on a very successful year. They have worked as a team to make some important decisions and thought about how aspects of our school could be improved.

Here are some of their comments about their work during the past year:

"We have done lots of recycling this year with the Big Battery Hunt and the councillors are responsible for collecting the paper recycling from around the school. " Lucas

" We've planned activities to make playtimes more exciting and helped Mrs Edwards decide on some new equipment for the playground." Sian and Sergio

The councillors have been very busy this year so far, helping to make some important decisions for the school.

We are very keen to try and make playtimes even more enjoyable for the children. The councillors thought that it would be helpful if everyone had more things to focus on in the playground, so they have been voting with their classes to decide what sorts of activities they might like to have at playtimes. Children suggested things like hoops, construction toys and a performance area. The school councillors have also chosen a huge new pirate ship that they would like Mrs Edwards to order so that they can pretend to sail the seven seas!

After the success of the Big Battery Hunt, the councillors decided that we can improve our recycling efforts in other areas of the school. The Year 1 and 2 councillors are now responsible for emptying all of the paper bins around the school into a central location so that paper items can be properly recycled.

The school council has been looking at what makes this a happy and safe school. Here are some of the things the children from their classes shared with them:

“I like the lunches because they are yummy” Holly

“The children liked the classroom as it was fun and they were able to learn well with their friends.” Esme

“It’s a happy place in the allotment. We love growing things” Emilia

Following on from this work the school council have decided to re-establish the playground buddy system. The councillors think this would help to make sure everyone has a happy playtime and someone to play with. They are currently making plans to train the buddies and are compiling a list of things they need for the finance manager. Watch this space for future updates on their progress.

This term the new school councillor's have already been busy in their new role.  After helping organise the distribution of this year's Poppy Appeal they have been interviewing their class to find out where they feel most safe in school.  The children looked at key areas in school grounds including areas like the classroom, playground, cloakrooms and corridors.  The school councillor's will now be looking at the results together and seeing if there are any trends throughout the school.  The councillor's and their class will then be generating ideas to help improve the school in the future and address any problems that arise.  We look forward to sharing their findings and our future plans.

We are pleased to announce that our new Reception School Councillors will be:

In the Spring term the school council worked hard to follow through with their plans to establish playground buddies at break times. They wrote a letter to Mrs Edwards and the School Business Manager, Mrs White, to ask for a new buddy stop, as well as bibs and hats so the newly appointed buddies could easily be seen on the playground. The school council also held an assembly to introduce their ideas to the whole school and have helped train the buddies ready to help any children who need a friend at playtime. Each class has four playground buddies and the four buddies from one Reception, Year 1 and Year 2 class will be the buddies each week. The school council felt it was important for the children to still get time to play with their own friends, so after one week the buddies pass the bibs to the next class so each class will get a turn and the other children get a chance to play. The selected playground buddies will continue in their roles to the end of the academic year. We look forward to sharing the new buddies experiences as they take on their new roles.

Mrs Barrett on behalf of the School Council

Unfortunately not the ones with chocolate chips.

Some cookies are necessary in order to make this website function correctly. These are set by default and whilst you can block or delete them by changing your browser settings, some functionality such as being able to log in to the website will not work if you do this. The necessary cookies set on this website are as follows:

Cookies that are not necessary to make the website work, but which enable additional functionality, can also be set. By default these cookies are disabled, but you can choose to enable them below: